In my MBF3C class today we observed quadratic motion and modelled it with http://www.desmos.com, and online graphing calculator. I’ve recreated the steps here (with some fake data).

First, I went to Desmos and projected a blank Cartesian coordinate system onto the screen at the front of the classroom.

Then, I found a black rubber stopper (I teach in a science classroom) a little more than an inch across.

I asked for two volunteers who would be willing to throw things at each other. That was easy.

They practiced lobbing the stopper back and forth to each other in front of the screen, trying to get the black rubber to crest visibly near the top of the grid. Eventually they were confident they could do it.
I held my iPhone in landscape orientation and recorded a slow-motion video. After a few attempts I felt we had a successful toss, and the students returned to their seats without injury.

We scrubbed through the video slowly and recorded the x– and y-coordinates for each major tick of the x-axis.

Then we plotted the points in Desmos (using the Table feature):

We then graphed a generic quadratic using the vertex form and its parameters (y=a(x-h)^2+k). Desmos provided the sliders for each parameter: 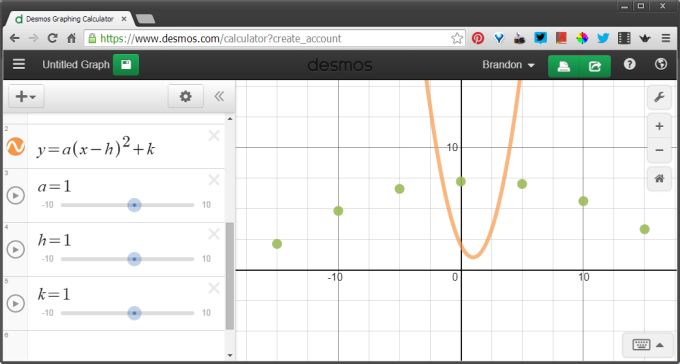 As a group the students decided to make a negative and small, to flatten the curve, then they adjusted h and k to fit: 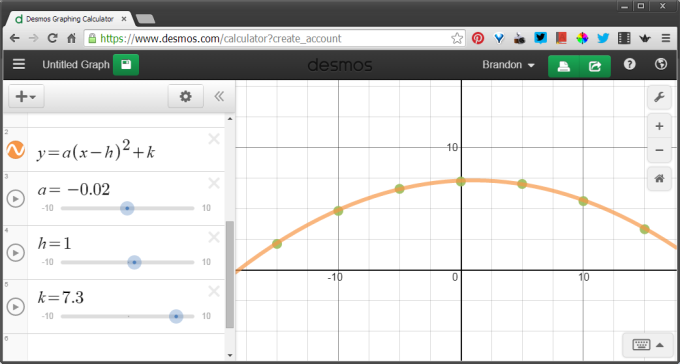 Some interesting stuff to note about the process:

I’m going to perform some more motion tasks with them to get more quadratic data, and we’re going to do some curve-fitting to model and predict things (for example, how far can you throw a ball off a 10th-story roof?).

I’d like to have a large, physical grid on the wall or something so that I can have the lights on when we record video.

I want students to record video and analyse it. Lots of them have iPhones, and I bet some of the other phones can take good, crisp video. If not, there’s some learning there too (about interpolation if nothing else).

I’ll try some other phenomena also.

A video you can use

Here’s another video we took, if you want to use it: