Whenever I prepare to teach a concept in my class I typically flip through my previous years’ stuff (notes, handouts, blog posts) to see how I approached things before. I also look in the textbook, especially to see the notation that is used.

I’m about to start teaching my MPM2D class how to solve linear systems. I’m going to start with the “Substitution” method, so I’ve been browsing the archives.

Solving linear systems is challenging, in my experience. Students tend to lack a good understanding of why we can substitute expressions for variables, and then they assume it’s simply arcane magic they need to memorize (albeit temporarily).

Today it occurred to me that our notation might be causing some of the problems, and improving clarity might improve understanding.

When we are solving a linear system of two equations, we are looking for the point(s) of intersection between the lines represented by the equations. Graphically, we want to find the point at which the lines cross each other. Students generally are fine with this idea. They get the picture (haha). 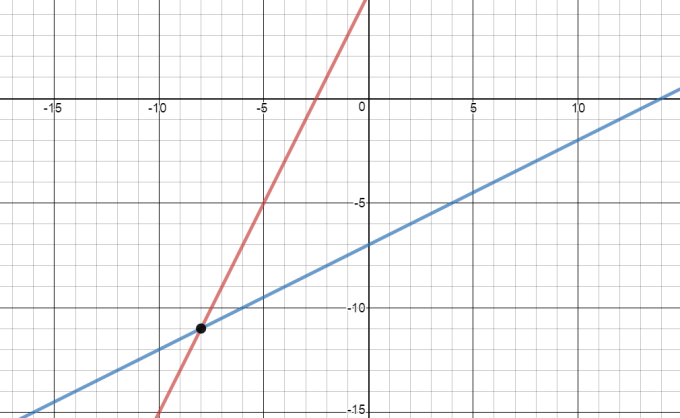 The trouble starts with algebra (doesn’t it always?).

We have two linear equations, and we are looking for the point(s) which satisfy both equation. That is, we want to find an

-value for which both lines have the same

The equations are statements about how the

-coordinates of points on the lines are related. For example, here are two lines:

These lines have a single intersection point, at

-value for which both lines have the same

To find this, my textbook, my past self, and my colleagues would all employ the Substitution Method, which says that if you can isolate a variable in one equation, you can substitute the corresponding expression in for that variable in the other equation to find the intersection point. This works because we are looking for the point for which both equations are true simultaneously.

In the example above, the first equation tells us that

. If we apply that restriction to the second equation, by replacing

This is the substitution for which the method is named. We now have an equation with one unknown,

. Solving this equation tells us that at the intersection point we have

. We can now substitute

back into either original equation and solve to get

Maybe it doesn’t really matter, but I’m concerned with how we often write out the algebra without explanatory words and with imprecise notation. I don’t mean during a lesson; in that first, iconic example in class we write out words like crazy, trying to make all the magic connections apparent. I mean during later solutions – practice exercises, one-on-one help, and student work.

I think we should be saying this instead:

Suppose there is a point of intersection

So the point of intersection is

See the tiny, subtle difference? We’re picking a specific point and calling it

in the other equation. And their concern is reasonable, because

; that’s only true at the intersection point.

We write out the sentence “When the lines intersection we have

” and go from there during our lesson or on our notes. That’s what my textbook does. But we rarely require this “extra” writing, and instead let a page of symbols replace clear communication and thorough thinking.

Should I try it?

Do you think I should use

and see what happens? Does it even matter? I’m not just being pedantic*; I’m hoping that better communication will lead to better understanding.

Let me know if you’ve done this before, if you think I should try it, or if I’m out to lunch on this one.

*I’m also being pedantic, I’m sure.

I’m currently teaching MPM2D, Grade 10 Academic math, and I’ve been having conversations about what’s most important for students to master in the quadratics part of the course. We’ve learned about the different forms of quadratic equations (standard, factored, vertex) and how transformations apply to give us vertex form, and we’ve started factoring.

The expectations I’m looking at right now are summarized here:

Of all that stuff, what’s most important? There is time pressure in this course, and I’m trying to focus on what’s truly essential moving forward. I also want to make sure that my evaluation reflects the importance of each understanding and skill.

Have you taught this course (or the sequels, MCR3U and MCF3M)? What do you think?